New Mexico, at 121,000 square miles, is the fifth-largest state in the U.S. Overseeing mine operations throughout such a large area while staying within budget is no small achievement. But the staff of the New Mexico Energy, Minerals and Natural Resources Department’s Mining and Minerals Division (MMD) are resourceful and supplement operating costs by using GIS, acquiring data at no or low cost, and forming geospatial or technical data-sharing partnerships.

The MMD ensures that mining operations, from exploration to reclamation, are conducted responsibly. Maps provide a baseline for analyzing activities and disturbances made by mining operations across the state’s vast landscape. MMD uses Esri GIS software to process mining operation and exploration permit applications and to report economic impacts.

To assess mining reclamation operations, the state uses digital elevation models (DEM) and digital terrain models (DTM) from various time periods, most of which were created by the US Geological Survey. In addition, staff use orthoimagery acquired from federal, state, and local governments and by mine operators. In recent years, the MMD has used orthoimagery acquisitions from the US Department of Agriculture National Agriculture Imagery Program to create newer statewide DEMs and DTMs.

DEMs and DTMs offer geographic representations of what areas were like prior to mining. The models reveal stock tanks and dams along drainage corridors and identify those that have been breached. The models also depict patterns in drainage basins that indicate sinuosity, which provide a method for analyzing hydrological and topological characteristics. MMD uses the digital models to ask mine operators to reproduce the degree of sinuosity that’s been determined.

GIS helps MMD track mining activity throughout the state as well as enforce reclamation regulations for surface mines and abandoned mine lands. GIS indicates land change, maps mine impacts, provides guidelines for mine reclamation projects, and tracks all mandated environmental and cultural assessments before project design.

DeLay employed GIS for prioritizing cleanup activities. She analyzed the location of legacy uranium mines and ranked their priority for reclamation. The basis for assigning rank to each of these mines was its proximity to streams, agricultural sites, urban areas, and wells. DeLay then used a weighted overlay GIS model to map reclamation priorities. She presented the New Mexico Legacy Uranium Mines map at MMD and sister agency meetings and at a national conference. The map helped decision makers decide where to allocate resources.

To monitor coal mine reclamation, MMD applied for a grant from the OSMRE Western Region to acquire WorldView-2 satellite imagery. Using this imagery along with on-the-ground vegetation surveys, the remote-sensing analyst is creating vegetation change detection maps for the Vermejo Park Ranch abandoned coal mine town reclamation project to aid specialists in evaluating revegetation and wetland mitigation.

Geomorphic reclamation activities included redistributing and burying the coal waste as well as reforming stream channels to a more natural pattern. The purpose of this geomorphic work is to eliminate movement of waste into drainages of the watershed. GPS devices were attached to earth-moving equipment to map the new terrain design. The imagery was so detailed that an analyst could actually tease out how many pinion and juniper trees were in the area at the time.

Analysts also use light detection and ranging (lidar) data. While satellite imagery provides a closeup picture of surface mines, GIS renderings of lidar data offer a highly detailed 3D perspective. These sophisticated 2D and 3D maps reveal the condition of an area prior to the commencement of mine operations.

MMD also used GIS to assess the impact on the vegetation and terrain around the El Segundo coal mining operation and proposed mine. To document baseline landform conditions, New Mexico Energy, Minerals, and Natural Resources Department acquisitioned two 25-square-mile areas of lidar data that had been captured prior to mining operations. Staff used first-return lidar data to render vegetation density images and bare-earth lidar data to model the terrain. The lidar rendering is a blueprint for what the mining company will need to do to restore the terrain’s original contour and reestablish vegetation to its initial condition.

Staff found a less expensive way to capture data by using an unmanned aerial vehicle (UAV). A compact camera mounted to a Trimble UX5 fixed-wing UAV takes a large number of overlapping orthophotos. Photogrammetric processing of these images generates a point cloud of x,y,z values rendering a 3D topographic model. MMD used this technique and GIS to create a topographic model of a stream restoration project at a historic coal mining town. By attributing the points with the photo RGB values, staff calculated the heights of the vegetation. To spot-check the accuracy of the remote-sensing data, staff went into the field to measure the heights of a sample of vegetation for comparison.

A camera mounted on a UAV rapidly takes pictures. These go through photogrammetric processing to generate a point cloud for a 3D representation of a stream. 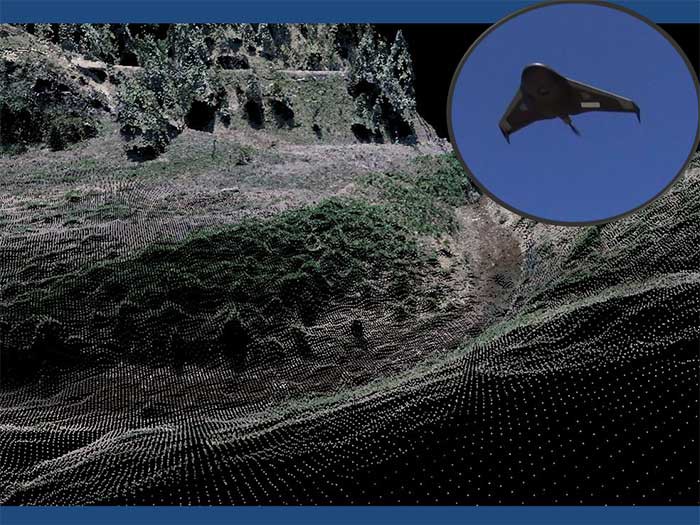 MMD currently uses Microsoft SQL Server, integrated with Esri ArcGIS for Server, to manage most of the mine information, geodatabase, and web map applications. The division is transitioning more of its geospatial data to the Esri platform. The geodatabase includes data from the state’s resource GIS clearinghouse, mine operators, and elsewhere as well as data generated in-house.

MMD makes mining information available to the public through its website. The site is GIS enabled by ArcGIS for Server with applications developed in Silverlight. Users can see the locations and names of mines, which are coded as active mines, inactive mines, and mines where bond has been released. They can also see coal mine permit boundaries, coal districts in New Mexico, and US coalfields characterized by coal type. The map also has a soil type layer and geologic period layers.


This interactive coal mine map is embedded in the mining division’s website.